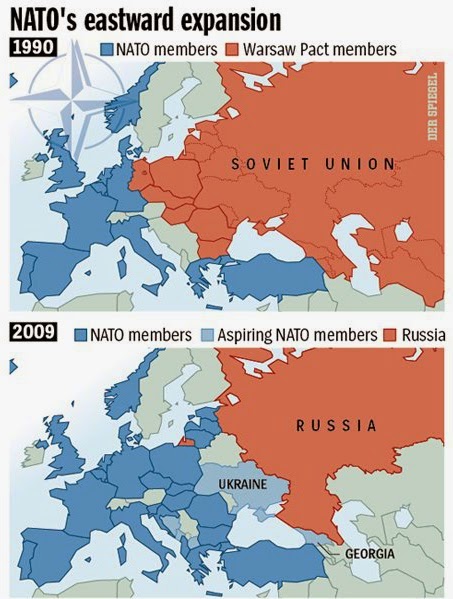 If you look at the map of the movement of the NATO bloc after 1990, we ask ourselves: how does this work? Where are the promises of the United States and the West not to move East? In what place did they hide this promise? In the Azovstal dungeon, or somewhere else? Of course, these promises look like a scam! Promised "former" - "former", and did not sign any agreements, shook hands, smiling, making a friendly appearance. Was Gorbachev a sucker then, euphoric with his "perestroika", or was he just playing giveaway to the joys of laudable praises from capitalist countries about his idea with this "gorbostroika"? It turns out that there was a document with promises!
"The document was discovered by Boston University professor Joshua Shifrinson. According to the publication, before it was kept under the heading "secret". It was compiled following a meeting of representatives of the foreign ministries of the United States, Great Britain, France and Germany in Bonn on March 6, 1991. They discussed the issue of the security of Eastern European states and recognized that the membership of these countries in NATO is "unacceptable."
The document also notes that during the negotiations of Germany, the GDR, the USA, the USSR, Great Britain and France, representatives of the West made it clear that NATO would not expand, and the alliance could not offer membership to Poland and other Eastern European countries.
"We made it clear to the Soviet Union at the 2 plus 4 talks, as well as at other negotiations, that we do not intend to benefit from the withdrawal of Soviet troops from Eastern Europe, NATO should not expand to the East either formally or informally," Der Spiegel quotes US representative Raymond Seitz from the same document.
Thus, the words of NATO Secretary General Jens Stoltenberg were refuted that the North Atlantic Alliance "never promised not to expand." It is noteworthy that he uttered these words in an interview with the same publication Der Spiegel.
Assurances of non-expansion of NATO were given in return for the USSR′s consent to the reunification of Germany. And it was Germany that a few years later became the "godfather" of the first expansion of the alliance to the east, including Poland, Hungary and the Czech Republic."
https://rg.ru/2022/02/18/der-spiegel-obnaruzhen-do...

It turns out that the United States, with the support of corrupt Western countries, simply showed us the "fact", speaking in their "low-level" American humor. Promised, but in fact deceived! And now they′re barking at our borders!

We had the Soviet Union, then Western countries respected us more, (or maybe they were afraid) ... We destroyed the Soviet Union, and it began from then on!.. Since then, except for Poland, Hungary, and the Czech Republic, the "NATO lure" has continued and continues to spread its vile anti-human vibes to all countries bordering Russia. Someone was infected with this "American-Western" infection, and someone was simply dragged by force: Estonia, Latvia, Lithuania, Bulgaria, Romania, Slovenia, Albania, North Macedonia, Slovakia, Croatia, Montenegro… To date, Ukraine, Bosnia and Herzegovina and Georgia have wanted to go there!

Our "unfriendly" countries, especially the USA, have cunningly come up with it! And in general, they did not come up with anything special and new! "Divide and conquer" — that′s their principle! This formula has been working for centuries for a long time, and has never misfired yet:
• creating, or at least not averting, petty enmity among smaller players. Such enmity drains resources and prevents alliances that could challenge the overlords.;
• help those who wish to cooperate with the overlord, often at the expense of disobedient local rulers;
• creating distrust and enmity between local rulers;
• approving spending on frills (for example, spectacular palaces) to leave insufficient funds for political maneuvering and wars.

After the signing of the criminal Belovezhskaya Agreement and the collapse of the USSR, the map of the movement of the NATO bloc began to change. The American-British snake began to crawl intensively, not sparing its "wrappers" of dollars, as well as "euro" wrappers, trying to squeeze Russia into a ring in all ways! A good example: how Ukraine was bought for these "wrappers".
An interesting knight move, they announced a check to us, as they say! They beat us, broke us apart, smiling from afar, and they unite themselves!.. They had the USA, and they stayed, and where did we fuck our "United States of Russia"!?.. It is not worth squandering the international community acquired for decades! That′s what capitalism smells like, "gentlemen of the jury"!.. That′s what a "squiggle" turns out!.. Moreover, the "unfriendly countries" want to further destroy and divide Russia through an information-fake war, through a "financial-wrapper" policy!
Questions arise: isn′t it time for us to expand our CSTO bloc too?! Unlike NATO, the CSTO is not going to show aggression towards other countries, it stands for intelligibly and definitely clearly - "Collective Security Treaty Organization". But as they say, "good should be with fists," and the more "fists" we have, the better and safer it is! It would be possible to take China there, India, Malaysia, Moldova, Serbia, Mongolia, Turkey, Egypt, Cuba, etc. For caution, so to speak, or for aesthetic diversity. Isn′t it time for us to unite into the Soviet Union again?! Even if this is not how our state will be called, but in some other way. The main thing is that the American puppet presidents smile less, so that the state and British imperialists who have eaten their rotten teeth at our borders do not clank, and do not incite their zombie jackals!