About the film "Balkan Frontier" and about Urgant 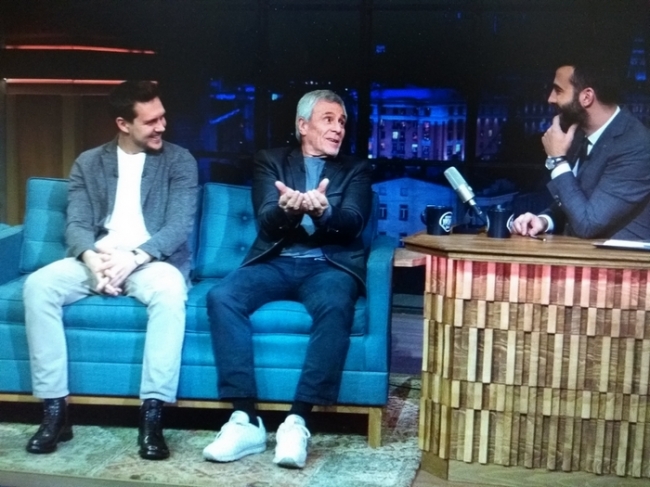 ­Actors Gojko Mitic and Milos Bikovic are visiting the Evening Urgant, talking about the film "The Balkan Frontier".
Wonderful actors, with an instant sense of humor! It′s sad that we have to play such roles in the war! "The Balkan Frontier" is a heavy film, and it′s somehow indecent to discuss it in this style of "evening Urgant". Urgant always conducts his programs on any topic, according to the principle of "giggles and hahanks". He expresses his point of view, as if with mockery. I invited such serious actors to talk about such a serious film, but in fact I didn′t really let anyone say anything, and I didn′t say it myself! All hee-hee, yes ha-ha!.. And how did this Urgand manage to stick to the first channel!? I would go to the Che channel and haggle there as much as I want! To be honest, I expected that at least something serious would be said on this program by analogy and on the topic of the war in Donbass and Ukraine, but nothing was said. I would like to remind you of the words of Slobodan Milosevic: "Russians! Russian Russians are now being addressed to all Russians, residents of Ukraine and Belarus in the Balkans are also considered Russian. Look at us and remember – they will do the same to you when you separate and give up. West – a chain mad dog will grab you by the throat. Brothers, remember the fate of Yugoslavia! Don′t let them do the same to you!"
"The Balkan Frontier" is a film about how Americans, without UN sanctions, brazenly interfere in the politics of other states, starting with provocations and financing of bandit formations, ending with bombing and restoring their order. From America to Yugoslavia is not the middle Light, however, the Americans there have a considerable interest in depriving Russia of an ally, and intimidating, plus getting a transport corridor to the oil and gas of the Caspian Sea and the Caucasus.
Gojko Mitic played a lot of positive characters in films about Indians, fought hard against evil. And here′s an even scarier story in Yugoslavia, where the Americans are using their bablos again! When will it come to them, to these arrogant, stupid and raking Americans, that genocide and similar antics in the modern world will no longer take place for free! We have also learned to be capitalists! And we remind you that "Whoever comes to us with a sword will die by the sword!" And of course, let′s remember the films about Indians, produced by the GDR (at that time there was a friendly country). Let us remember and recall that an Indian′s arrow will fly faster than a pale-faced bullet!